William and I went on our first trip of 2020 – to Ohio – in January. I know – it doesn’t really make sense. We went because my sister and her family had a break in their farming and ranching work and they were flying to Ohio from Colorado. Since they were going to be in Ohio, and my brother and SIL were going to be at my parents’ houses also, I couldn’t pass up the opportunity to go home and see everyone at once. William still flies for free, so he came along with me. The girls stayed in California with Dan to keep up with school and Spanish lessons.

I have not had the best of luck when flying across the country to Ohio (especially by myself) with the kids. There was that time with Dan and Vivian when I was pregnant that we got rerouted to St. Louis and then ultimately stranded in Chicago in November with no luggage or winter coats due to weather. That time I was by myself with both girls when I was newly pregnant and our plane’s landing gear wouldn’t close after takeoff and we were rerouted to LAX. That time I cried because I was 33 weeks pregnant and flying by myself with Lillian as a lap child and Vivian as a toddler and I was so uncomfortable and thought that the flight was never ever going to end. That time I was by myself with a 2 year old, 4 year old, and 4 month old and got stranded overnight in Chicago with no luggage due to weather. And that time that I flew direct and the airline still lost all of our luggage for two days. And now, once again, I had plans to fly across the country alone with a baby – in the winter – through Chicago. Oh, also, it happened to be on the same day that a huge snowstorm was moving through the Midwest. Luck was not on my side!

This time, though, I was prepared. I packed extra clothes for both of us in my backpack; I refused to check a bag and instead lugged our suitcase on the plane with me; and I carried our winter coats with me on board the plane (this meant that I had to walk through three airports carrying a toddler on my back/front (I didn’t bring a stroller), coats in my arms, and a backpack in my arms/on my back – all while dragging our suitcase). If I got stranded in Chicago, I was not going to be without coats and luggage this time!

We flew over the snowstorm in our path and landed in Chicago at 1pm. There was no snow on the ground, but all of the big yellow snowplows were lined up next to the runways ready and waiting for it. I kept obsessively checking the radar. We boarded our small regional jet and took off from Chicago at 3pm. The snowstorm was right behind us. Within hours, O’Hare had issued a ground stop for all flights. Over 800 flights were cancelled in Chicago. But not ours. We had made it out in the nick of time and landed on time in Toledo. That night, the snowstorm rolled through Ohio and when we awoke the next morning from our safe and cozy beds, a beautiful white (and cold) world awaited us. Perhaps my luck has changed!

We – And Our Luggage! – Made it to Toledo On Time 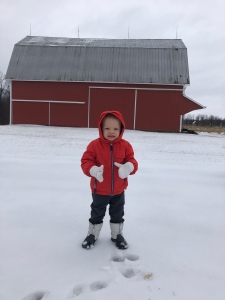 I spent most of the weekend relaxing. Really. I only had one child to care for and my Mom was, as usual, extremely helpful. She woke up every morning with William and made him breakfast while I slept in. She gave him every bath. She made dinners and snacks for us. She did our laundry. I was utterly spoiled. I caught up with family, read a lot, and was actually pretty lazy.

We spent most of our time during the day at my Dad’s house since my brother and sister and their families were staying there and my aunts and uncles gathered there. My Mom cooked a “Christmas” turkey dinner for us one day since we didn’t have one together as a family last season. My Dad had his right foot and lower leg amputated right before Christmas (as a result of his heart attack and its aftermath last April) and so we helped him some with things around his house since he doesn’t yet have a prosthetic. The baby cousins, who are six months apart in age, had a blast together and it melted my sister’s and my hearts to hear their hilarious and loud laughter.

One night, us “kids” went with my aunt and two uncles to dinner in my old college town and to watch an ice hockey game at my undergraduate alma mater. I hadn’t even driven through campus in nearly a decade, so it was interesting to see the university’s changes and fun to be back on campus. BGSU lost to Minnesota State 3-6 in overtime, but we still celebrated our night out sans kids (my Mom watched the babies) with after-game drinks downtown at Reverend’s Bar & Grill. 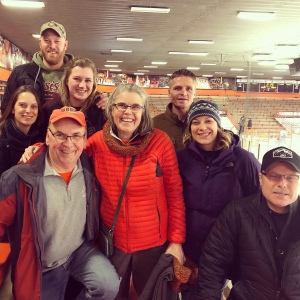 Besides eating pizza out one night at a new-to-us pizza joint in Clyde, our only other outing was to storytime at the library and shopping at a kids’ thrift store in downtown Fremont that is closing soon.

Our flights home, although long, were uneventful (especially for us). We are looking forward to another trip to Ohio later this year. That one, with all three kids in tow, though, will, I’m sure, be much less relaxing!